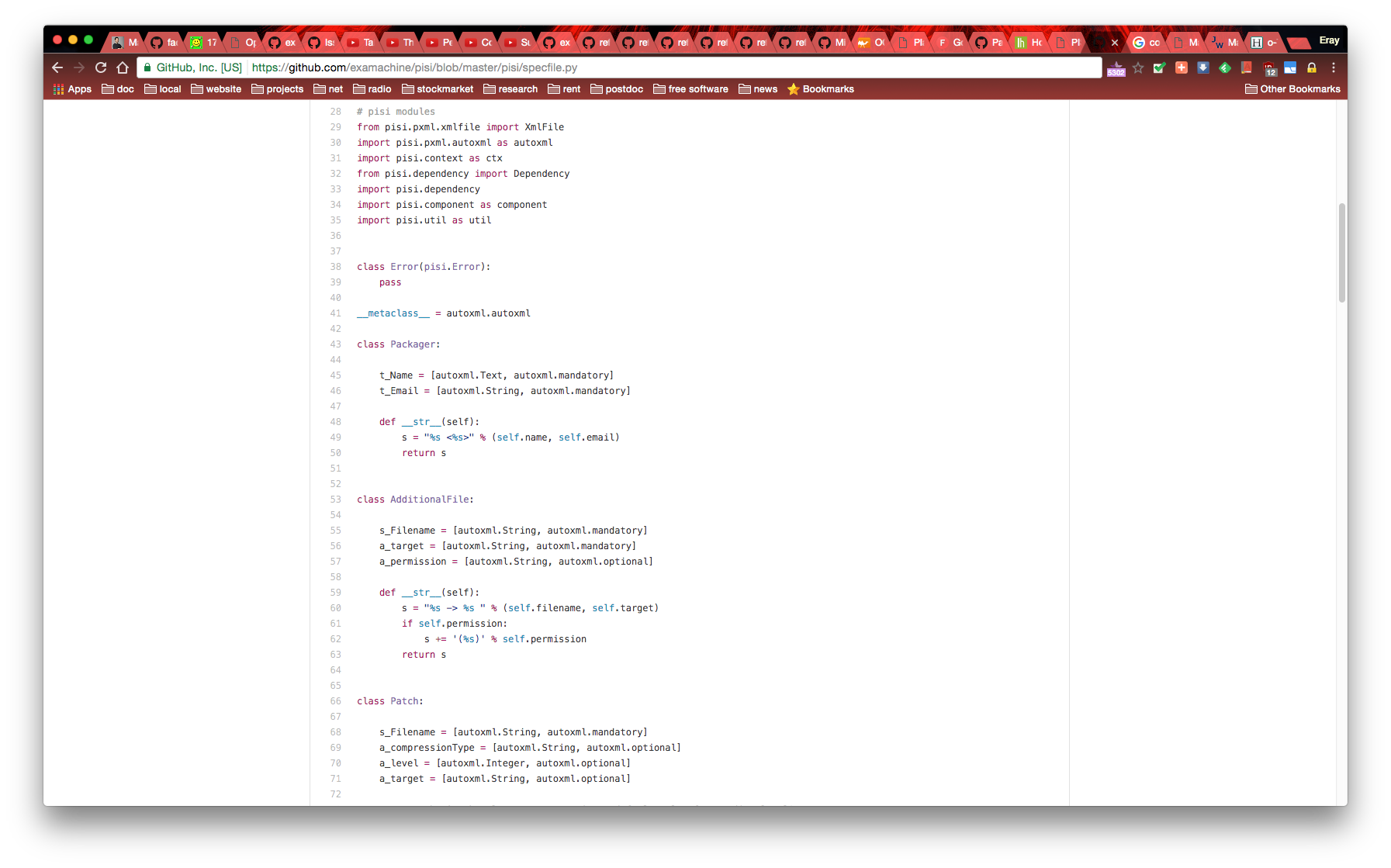 These suggestions are generally applicable to Python applications, although they were written during the evaluation of development plans for PISI, which is a neat fast package manager written in Python.

In particular, this means no lameCaps.

1. When using dirnames, don’t expect the dir to end with a trailing slash, and please use the dirnames in pisiconfig. Use util.join_path instead of os.path.join.

5. Don’t make the PISI code have runtime dependencies on a particular distribution (as much as possible).

6. Don’t assume narrow use cases. Allow for a mediocre amount of generalization in your code, for pieces that will be required later.

7. If you are changing something, check if that change breaks anything and fix breakage. For instance a name. Running the tests is not always enough!

8. A good design ensures separation of concerns. Every module has a specific documented responsibility. Don’t make the horse clean your windows.

9. To ensure readability avoid nesting python constructs more than 3 levels deep. Python is a good language (unlike C), so you can define inner functions in a convenient way, use such decomposition techniques to break down your code into manageable chunks. The worst code you can write is one huge procedure that goes on for 1000 (or more) lines.

10. Use a particular abstraction like a class or function only if it makes sense. Don’t just define things because they can be defined. Define only things that will/may be used.

11. If you are doing an expensive task like searching through 10000 text chunks, please use an efficient data structure and algorithm. We are not MS engineers who know no data structure beyond doubly linked lists and no algorithm beyond quicksort.

12. Resist the temptation to develop kludges and workarounds in response to pressure. Take your time to solve the problems by the book. The payoff comes later.

13. Same thing goes for premature optimizations. Knuth and Dijkstra are watching over your shoulder. 🙂

There are two branches of pisi, one is called pisi-devel and new features that are large enough to cause instability go into that branch. The trunk version is supposed to be stable at all times. This means that you *must* run unit tests and other test scripts after committing any change that cannot be tested in isolation. Run the unit tests periodically to catch unseen bugs. A release from the stable branch *must not* break any tests whatsoever, so extensive use of the test suite must precede any release.

Unit tests are located in unittests directory. Running the tests is trivial. But you must synchronize your code and data with the test code, which can be a tedious work if you lose discipline.

Sample data files are located in the same directory with test modules.

For running the entire test suite, use the following command:

The following command will run tests in specfiletests and archivetests in unittests dir:

Do not depend on the output of unittests. Instead of producing an output message/data in your tests, check the data internally. By definition, unittest should just report succeeding and failing cases.

There are a couple of nice test bash scripts for testing the basic capabilities of the command line interface such as building and upgrading. Unlike unit tests, you have to take a look at the output to understand that the scripts are doing well 🙂